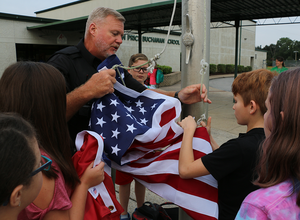 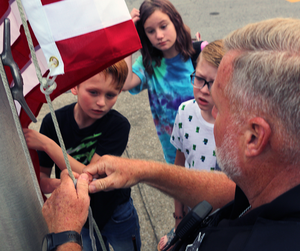 A long-time police officer and veteran, Farmer wants to have positive impact on students

The American flag has a special meaning for Curtis Farmer.

Farmer is proud that his family has served in every conflict involving the U.S. military going all the way back to the American Revolutionary War. He’s proud to have served as an Army Ranger. He’s proud the oldest of two sons has chosen to follow in his footsteps.

The East Tennessee native — he’s one of four siblings — worked as a police officer in Knoxville and has been with the Rutherford County Sheriff’s Department for nine years. And he is now beginning his fifth school year as a school resource officer at Buchanan Elementary.

If his family’s history of service taught him to respect the American flag, working in law enforcement focused his attention on the importance of reaching out to young people.

RCS: What do you enjoy most about your role as an SRO? And why did you specifically request an elementary school?

FARMER: I can make the largest impact on children. I remembered back when I was a child, we never talked to the police. We never waved at them. We didn't do anything. In fact, the police were almost the enemy that we stayed away from. When I became a police officer in Knoxville, I did community policing and I saw how we needed to bond with the public. I'd drive through subdivisions and I'd wave at the kids and they'd wave back. If you help people, people will help you back. If you give, they'll give back. There's always that distrust that you have to work through. You try to repair all that broken stuff or that bad reputation that you have as a police officer. When I came here … I saw how much better the relationship was in Rutherford County with the police, especially the sheriff's office. I wanted to be a part of that. I requested to come to an elementary school because I figured if I got into an elementary school, I could teach them about the United States flag. I can teach them about respect: Yes ma'am. No ma'am. Yes sir. No Sir. And being polite and waiting until somebody stops talking and then talk to them. In other words, just being a human being and being polite. We have to lay that foundation.

RCS: How did having the students help raise and lower the flag come about?

FARMER: Most schools don't incorporate the kids. I saw that the children needed to know a little bit more about the history because I was being asked, “Why don't we take down the flag when it's pouring down rain?” Number one, there's not an order or a request from the president. I'll talk to them about the colors and what the stripes mean. And how women and children died for that flag, not just grown men, from throughout all of history. And the Pledge of Allegiance, what it really stands for. That's what I think makes America great is diversity. We're a melting pot and we have to stay united.

RCS: Incorporating them is as much a civics lesson as it is anything else.

RCS: How do you go about selecting the students who are going to help you?

FARMER: Well, the other day I walked in and I talked to the whole entire fifth grade class and I said, "I need help putting up the flag." I said, "I'd love to teach everybody in the entire class, but this is strictly volunteer." I teach them how to raise the flag, what the colors mean, what the Pledge of Allegiance means. I teacher them how to salute. I teach them how to pull up the flag all way to the top and back down for half-mast and what half-mast means. And how to fold the flag up properly and why we fold it up that way. The ones that get here in the morning that are bus riders are normally here way before the car riders are, so they are normally the morning crew. They come in, run out there and they love to go put up the flag. And then in the afternoon I use car riders and do the same exact thing.

RCS: Anything you want to add?

FARMER: When I got here (this morning), I did a perimeter check, checked the cameras out and then I stuck my head out that front door and looked up and the flag's flying. They've been putting it up since last week. I watched them fold it up yesterday. I said, "Remember you got to have at least four people out here if not five or more." They said, "Oh, she's still coming" and she stepped right out and it was perfect. They did a great job and they take pride in it. I'm hoping that will stick with them — I know it will — for the rest of their lives.