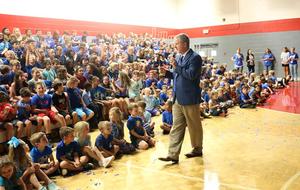 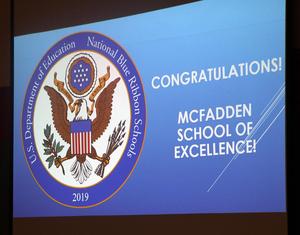 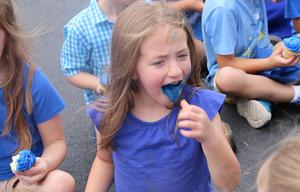 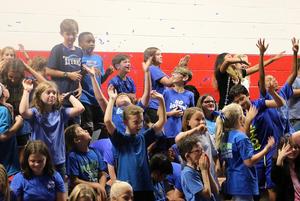 For a second time, McFadden School of Excellence has earned a national award placing it among the best schools in the country.

The U.S. Department of Education today announced McFadden as a National Blue Ribbon School for 2019.

“We recognize and honor your important work in preparing students for successful careers and meaningful lives” said U.S. Secretary of Education Betsy DeVos in a video message to the honorees. “As a National Blue Ribbon School, your school demonstrates what is possible when committed educators hold all students and staff to high standards and create vibrant, innovative cultures of teaching and learning.”

McFadden Principal Dr. Clark Blair and Assistant Principal Andy Roach held a surprise announcement in the gym for both students, faculty and staff members. Students and employees had been asked to dress in blue for the occasion.

“There is a power of one — the power of you,” Blair told students. “You affect others on the team by doing your best.”

The school, through support of the parent-teacher organization, gave out blue cupcakes to all students who then celebrated outside with their teachers and peers.

Now in its 37th year, the National Blue Ribbon Schools Program has recognized more than 9,000 schools. Secretary Devos and the U.S. Department of Education will celebrate with 312 public and 50 non-public school honorees at an awards ceremony in Washington, D.C., Nov. 14-15.

Schools can earn recognition in one of two performance categories, based on all student scores, student subgroup scores and graduation rates:

This is the second time McFadden has earned the award. Schools are eligible every five years, Blair said, and the school last earned the distinction in 2013. McFadden earned the award both times for its high student-achievement rates.

Blair often tells students to push themselves and work for failure every day because it’s the best way to learn. “Fail,” he says, stands for “First Attempt In Learning.”

It’s that mentality, and the support of everyone within the school community, that makes McFadden a highly effective school.