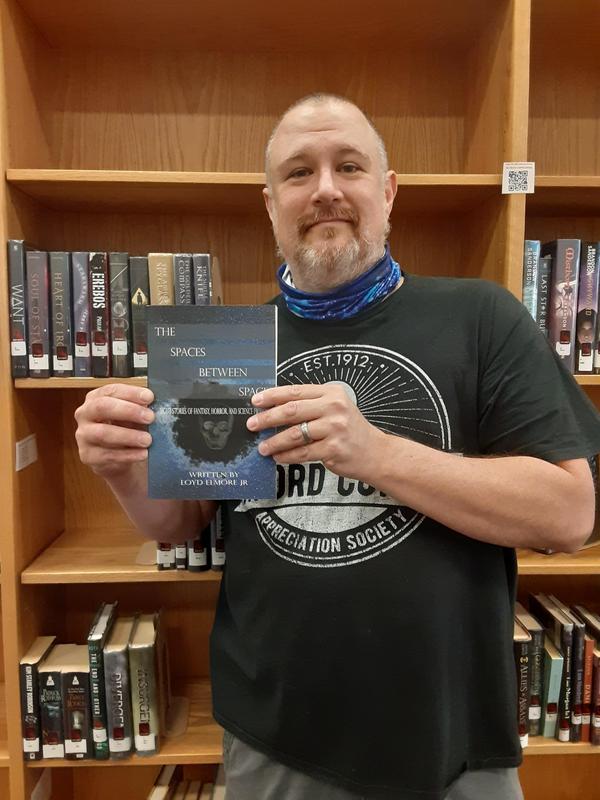 Loyd Elmore Jr. has been a custodian at Blackman High since August.

He’s been writing short stories for decades and thought about publishing a book for years.

“Never stop dreaming and pursue what you love,” said Elmore, who finally took his own advice and sat down early last year to compile a collection of short stories and package them together in a newly self-published book, “The Spaces Between Space: Eight Stories of Fantasy, Horror, and Science Fiction.”

Elmore wrote a much larger collection of short stories over a two-year period and then spent four months last spring and summer editing, polishing and choosing eight of them for his first book. He hopes it creates an eerie chill among readers.

Born in Texas and raised in Tennessee, Elmore’s writing is influenced by Stephen King, Rod Serling (best known as the creator of The Twilight Zone) and, more recently, Neil Gaiman.

Elmore recently talked about publishing his first book, which is available on Amazon, and the ideas he has for a few more books he now hopes to publish over the next couple years.

Of all the short stories you have written, how did you go about choosing thisparticularcollection?

When I write stories,I always picture them as a movie in my head and, as a matter of fact, one of them actually was going to be a short film because I've done three or four of those in my life and I'd written the script. It never got made ... so I rewrote it and turned it into a short story. Of these eight, I admit there's some I like better than the others, but I think they're all pretty good. Other than three or four of them, I don't know why I chose the others. They sort of fit together in a way.

What is the common thread?

I would say the element of time is a factor through all of them. I always had a fascination with time,and,I guess, you know, it took so long for me to finally get the courage to do it (laughing) so, that's something to do with it.

Now that you followed through and published your first book, what does your family think?

My wife, she's very proud and she knows this is something that I've been wanting to do for a long time. I know there's some people that probably think it's childish to want to do something creative like this ... but, anyway, I think if it's something you have a passion for it's worth doing. I wish I could go back to tell my younger self to not be afraid and to really strive to do it, that it's not an impossible dream to have.

What about your kids?

I think they always knew that I had it in me and pretty proud of me and that makes me feel good, so it helps push me forward.

Have you begun the process of writing more short stories?

I've given myself a schedule. Before getting into doing these eight stories and finishing them up, I had already written a novel, which I plan on publishing this year. I think I'm going to publish a book a year until I run out of ideas or I'm dead. ... I don't really want to say what (the novel) is about yet, but it's more fantasy and then next year I plan on publishing another book of short stories ... but then there's a book that I want to write that I've already started doing research on. It'll probably take me three years to get it to where I want it to be. It's a historical fiction book based on Maureen Dunlop. She was a World War II fighter pilot for England— one of the few— and I am surprised her story hasn't been told yet. I want tackle that.

So now that you'vepublished onebook, it'll be easier to do it again and again?

There's still that fear and I don't know if it ever goes away. I haven't got to that point yet. But yeah, I think it'll be a little easier to do, but sometimes it's really one day at a time.

What have you been doing to get the word out?

Well, I have a lot to learn. Marketing oneself, I've always found it difficult for me, so there's a lot of learning that I'm going to have to do. But because of a friend of mine— a new friend of mine, (Blackman High librarian) Brian Seadorf— I will have a book signing this summer at the Murfreesboro library, so that's kind of a marketing ideas. Nervous, but I'm looking forward to that and I'm gonna have to explore some different ways to try and publicize my writing online.