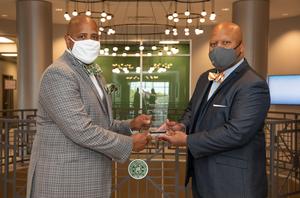 Holman graduated from Motlow State in 1993 with an associate degree in Elementary Education.

"Motlow served as the foundation to my higher education experience. In all things, the foundation is the most important component. Motlow State Community College continues to stand as a pillar of excellence," said Holman.

At Motlow, Holman is a member of the Strategic Planning Committee, member of the Alumni Association, and previous speaker at a GED graduation, Black History Month celebration, and MP3 Year-end Banquet.

"Dr. Holman brings to life the purpose and mission of the community college, particularly Motlow State. The access and experiences provided at Motlow helped shape the future Dr. Holman envisioned and now lives,” said Brenda Cannon, executive director of community relations.
“He knows the power of education, strongly believes in the community college, and pours tirelessly into students and community; hence, he was a perfect choice for the Alumni Award. His career as an educator lights the path for others to follow.”

The next three years, he went back to teaching 5th grade at Homer Pittard Campus School in Murfreesboro.

He became principal at Central Middle School in Murfreesboro.

He began his current position as principal of LaVergne Middle School in July 2010.

Some of Holman's many accomplishments include developing the "Project Feed" initiative that provides free Thanksgiving meals to the community, training and presenting at the Middle Tennessee Vocational Teachers Conference, developing and coordinating the Mini University summer youth program sponsored by MTSU., and as a guest speaker for a college class, churches, and community forums.

The Foundation's mission is to connect private and corporate philanthropists with opportunities to support Motlow State and build relationships that make a difference in our student's lives and our communities. The awards are presented in person at the Annual Motlow Gala in the spring; however, the Gala was held virtually this year due to the pandemic.

The Motlow College Foundation is a nonprofit organization supporting and advancing Motlow State Community College's objectives to provide educational and career opportunities. The Foundation offers scholarships and financial assistance to deserving students, equipment and program enhancements to academic and athletic departments, and capital funding for new college facilities and upgrades.