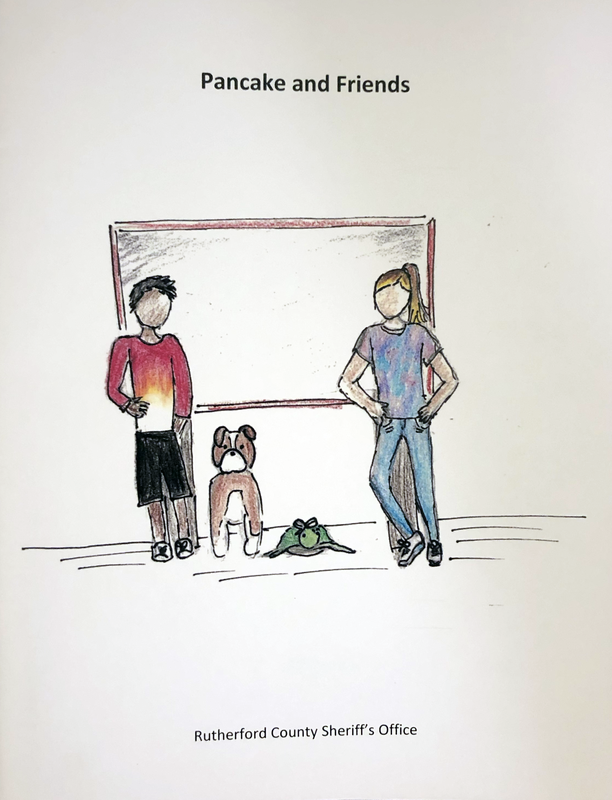 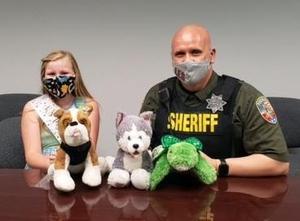 Dodson is so passionate about his lessons that he wrote a book titled, “Pancake and Friends.” Fellow School Resource Officer Kerry Nelson assisted with the book. It was illustrated by Lascassas fourth grade student Gabrielle Baron with guidance from art teacher Bonni Smith. The book arrived Wednesday.

The school resource officer introduced an Old English Bulldog stuffed animal named Pancake to the students to help them during COVID last year. Dodson sat in the hallway during lunch and used Pancake’s limbs to wave and interact with the students.

To the children’s delight, he worked with teachers to develop pictures of Pancake’s activities such as Pancake patrolling the campus, fishing and snow skiing.

As the year progressed, he introduced Peek A Boo, a stuffed turtle, and T-Bone, a Husky.

Because of the stuffed animals’ interactions, Dodson wanted to do a book for the children to keep positive memories about the school year and because the kids love Pancake so much.

“I also wanted it to cover some of the fears and challenges students had with COVID,” said Dodson who has been the Lascassas SRO five years. “I also wanted this book to tell how we can change the world around us by helping people, don’t judge people before you know them and not all police officers are scary.

“These are some things that we definitely need to be talking about with kids,” Dodson said. “I wanted them to see that they can make a difference, we all can, one person at a time.”

Pancake encouraged students to give to the fall canned food drive because so many more families were hungry during COVID. When the students collected a record 13,340 cans of food for Greenhouse Ministries to feed hungry Rutherford County residents, SROs prepared pancakes for the students.

Dodson started on the book in January with a goal to use the book as part of the PTO’s annual school fund-raiser where the kids walked laps with sponsors donating money for each lap. He formed competitive Team Pancake and Team Peek A Boo with the top 12 students receiving a copy of the book.

To encourage the competition, he brought Team T-Bone, the stuffed animal the students didn’t like because he was “trash talking” the other teams during school announcements. Parents and students were determined not to let him win.

PTO Co-President Kelly Fiore, a former teacher, said Dodson worked to pump up the kids with Pancake, Peek A Boo and T-Bone. The students raised a record of almost $41,000 because of Dodson’s efforts. One-half of the funds will be used for teachers and the remaining one-half will pay for a playground extension and games for the students.

Dodson incorporated T-Bone’s role into the book by showing how he worked with the students by encouraging them to raise money. The book reminds students not to judge people before you know them.

“He (T-Bone) loves Lascassas,” Dodson said. He’s part of the Lascassas family. He probably just tried to hard when he came in.”

The students are now asking about T-Bone.

Principal Kim Marable said Dodson has been a pillar of support during this challenging school year.

“He used Pancake as a method to provide students with something positive to distract them from some of the changes they had to endure,” Marable said. “He always tries to create ways to motivate the students in our school. His idea to create the animal characters to enhance a healthy competition led to us to raising more money than LES ever has for a Panther Prowl. He does whatever it takes to keep our students safe and happy.”

Fiore, whose daughter Isabella is a fifth grade Lascassas student, said Dodson connects with all the students.

“He loves those children like they are his own,” Fiore said.

He read the book to students about the life lessons to change the world by talking about issues, being kind to each other and to not judge. Some students told him they liked the book.

“We need to talk more about treating people fairly and not judging others,” Dodson said. “Hopefully that will get conversations started.”

After summer break, Dodson will return with Pancake, Peek A Boo and T-Bone. He plans to introduce a new character next year.