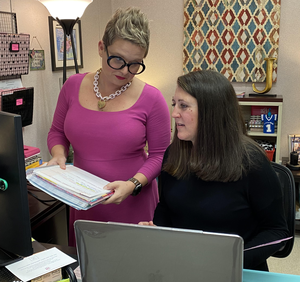 With about 30 minutes left before the deadline to apply for a new position as ATLAS Family Engagement Specialist, Kyle Bowron thought long and hard before finally moving her cursor over the submit button and clicking.

It was not as though Bowron (pronounced Bo-Run) had second thoughts about the position.

Her heart had been at Oakland Middle School as a counselor for the past two years and a year at Buchanan Elementary prior to Oakland. So the Wyoming native, who had studied counseling at Middle Tennessee State University, found it more difficult than she expected to leave the kids she had worked with for the past few years.

As a counselor, she helped students with all their needs within the confines of education at each respective school, whereas this new role allows Bowron to connect entire families — students, parents and siblings alike — to the resources they need to be successful.

“I thought I would be able to reach more families on a larger level,” Bowron said of her reason for ultimately pursuing this new and emerging position. “Through this partnership with United Way … I have been able to connect our families and our communities with resources that, last year, I didn’t even know existed.”

Bowron’s first day as the family engagement specialist, which is paid for by The Family Collective initiative of the United Way, was July 19.

The Family Collective was initially founded by the Greater Nashville chapter of United Way in 2014 to prevent and end homelessness. It recently was expanded to Rutherford County through a grant from the Tennessee Department of Human Services.

Through the Family Collective initiative, Bowron will help families of ATLAS students find a stable living environment, employment or other needed resources.

“Even though I know the ATLAS program is not in the housing business,” Johnson said, “I do think Kyle’s position helps to bridge that gap. It’s not Rutherford County Schools helping you find a home or extra resources, it’s someone from the school system that is linking you with other resources and it gives our school counselors more (options). They can’t do this for everyone they’re concerned about, (but) they can refer those families to Kyle.”

Bowron was raised in an environment where her parents and grandparents had a call to serve and help others. As she explained, “they have always gone above and beyond.”

“It’s something that was a part of our childhood,” said Bowron, who was taught by the elder generations to do “what was right for everybody, and you took care of your community.”

“She’s awesome,” said Johnson, who later added. “It’s a blessing to have an extra person helping me with this because there’s no way we can meet those needs without her and without the partnership with United Way.”

Rather than simply providing families a checklist of agencies — a time consuming process that can be as intimidating as it is complicated — Bowron becomes an access for needy families and The Family Collective.

Unfortunately, some of the families who are in the worst situations are often the last to learn about the United Way.

And, for a multitude of reasons, many do not have the wherewithal or life skills to get themselves out of their current situation, much less know where to even begin such a daunting process, without some guidance.

“We have a lot of new people in our county who literally know nothing about the resources we have and … different qualifications for all the organizations that offer help,” Bowron said. “It’s overwhelming and frustrating.”

Bowron continued, “Literally, we have helped families get out of living in their car and to see that smile or just to visibly see those parents shoulders relax and to hear sigh, where they don’t have to worry about where they’re sleeping tonight, that make it worth it.”

Bowron wrote and was approved for a grant, which she and Johnson are planning a small family resource center that will provide computers and printing services for parents to complete job applications for families lacking technology devices and internet connection.

They are also planning four community gardens — two in Murfreesboro and one in both Smyrna and LaVergne — to create and cultivate a positive impact between students, families, and the local community.

LaVergne Middle is planning to have its cooking club facilitate the LaVergne garden.

“These are big life changes that these people are making and sometimes they’re coming out of really horrible situations, and this is the first time they are doing these things on their own,” Bowron said. “So, just supporting them and letting them know, yes, it is going to be hard, but we’re here to help you through that and we’re going to take it one step at a time as you’re ready for each step … it can be overwhelming.”