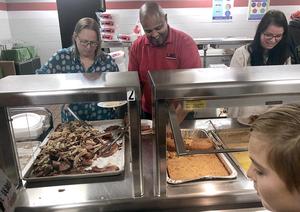 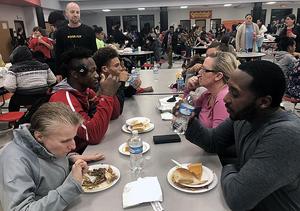 It was originally an idea born out of showcasing the success of his students.

Now, 15 years and more than 14,000 meals later, Dr. Cary Holman and LaVergne Middle School will host one last Project Feed on Tuesday, Nov. 23 from 3:45 – 6 p.m. For the second year in a row, the project has been modified and will be a takeout only service.

As always, the annual community Thanksgiving meal is free and open to the public.

Holman made it known 2021 will be the last year for Project Feed.

This will be the 12th consecutive year LaVergne Middle has hosted the event since Holman became the school’s principal in August 2010. He previously led Project Feed three of the four years he was principal at Central Middle (prior to the school transitioning to Central Magnet).

“You think of the impact that you’ve had over the 15 years and the number of meals and not only the meals, but just the conversations that I’ve had with parents, with families,” Holman said, “and I felt like, you know what, it’s time to really go out on top and 15 is a good number to end on.”

Holman would like to expand that idea into a broad-scale event including community partners that would include booths and food trucks, perhaps, an antique car show and a flea market environment.

“I believe in the power of community and family partnerships,” Holman said. “So, anytime you get … large groups of people together, just that uniqueness – the wealth of resources our community has – is what I’m really wanting to capitalize on.”

Holman added, “I just want to really highlight, showcase what’s here in the area for people to really capture and hold on to.”

In the meantime, Holman remains focused on next week’s event.

In addition to the entire school coming together — students and faculty alike prepare all the food under the direction of Holman — Project Feed would never have been possible without the participation of the entire community, including banks, churches, grocers and other local businesses.

In the past, Holman has spoken about Project Feed being a powerful way of bringing together students — past and present — and faculty.

“What does my heart most proud is when our students want to come back and always lend a helping hand,” said Holman, who is moved by a mother and former student who continue to volunteer even though her son is in high school. “This has become an event they look forward to each year. That will probably be one of the hardest things, but appreciative things as well.”

Holman concluded, “It will most definitely be a bittersweet event.”

LaVergne Middle School principal Dr. Cary Holman, center, and his staff serve food during his school’s annual Project Feed, a free Thanksgiving meal for the community. Holman has put on the event for the past 12 years at LaVergne Middle and three years while at Central Middle School.

Members of the LaVergne community laugh and fellowship while enjoying a free Thanksgiving meal at LaVergne Middle School. Led by Principal Dr. Cary Holman, the meal is prepared by students and employees at the school using generous donations from local businesses, parents and community members.