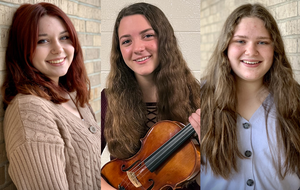 Two-time Tony Award-winning actress Bernadette Peters recalled her Carnegie Hall debut as “one of the most exciting, perfect evenings of my life.”

Peters had already acted on Broadway, network television and the silver screen.

A trio of Rutherford County students — Isabella Kinard, Robin Houghton and Aubrey Redhair — have been selected for the 2022 High School Honors Performance Series at Carnegie Hall in New York and they are not even old enough to have voted yet.

Kinard is a violist from Central Magnet, while Houghton and Redhair are voice students from Riverdale High, and they will participate in the Honors Instrumental Performance and Honors Choral Performance respectively.

The finalists — including students from 47 states, Australia, Bermuda, China, Guam and South Korea — will gather in New York for five days, which culminates with performances on Feb. 5-6.

These performances — the first since February 2020 — are open to the public and tickets are available at the Carnegie Hall box office beginning 60 days prior to the performance.

During the first three days, Kinard, Houghton and Redhair along with the entire elite group will learn from and work alongside world-renowned conductors and experience being in New York City.

“We processed nearly 10,000 nominations this year and have selected over 500 of the most talented student performers from around the world,” said Marion Gomez, programming director for the series. “Working with these conductors and performing at Carnegie Hall is a once-in-a-lifetime experience that these musicians will never forget.”

Kinard described the opportunity as an honor and a dream.

“I’m very excited about the music,” said Kinard, who in addition to the aforementioned conductors is looking forward to “playing with the other students from around the world. I’m hoping to make new friends from different countries and cultures.”

The series was created to showcase accomplished individual high school performers on an international level by allowing them to study under master conductors and perform in the celebrated venue, according to release from the Honors Performance Series.