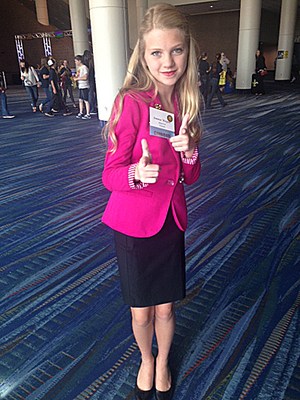 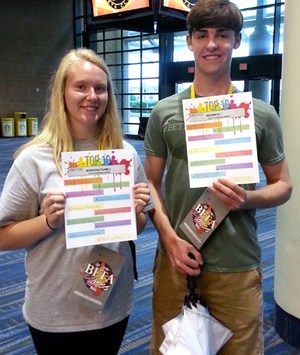 Most students will tell you they don't like taking tests. But that's not the case for Maron Williams, a soon-to-be-junior at Eagleville School.

In fact, she enjoys taking tests so much, she even labels certain questions her "favorite."

This summer, during a test at the National Senior Beta Convention, her favorite question was: "How many beats are in a gallop?" The answer, she replied quickly, is four.

For her performance on that test, Maron placed eighth in the National Beta Convention's Agriculture Division I. She was one of several Rutherford County students who performed admirably during the junior and senior conventions in New Orleans this summer.

"It was really fun," Maron said. "I got to meet a lot of different people from different states and made a lot of friends down there."

Agriculture is a way of life for Maron, who lives on a 180-acre farm and as a young child dreamed of actually being a horse, she said.

Beta Club is an organization for students in 4th-12th grades "to promote the ideals of academic achievement, character, service and leadership among elementary and secondary school students," according to the organization's website.

Mitchell Turner, who will also be a junior at Eagleville this year, placed ninth in the Science Division I at the national convention. The competition involved students taking a test and then being ranked against other student participants, all of who had to place in their state-level contests to qualify for the national convention.

Mitchell placed first in the Tennessee Beta Convention last fall, which earned him a spot at the national convention, he said. Mitchell enjoyed the convention and hopes to return next year when it is held in Orlando.

"The main thing that we do is gather every day for one or two sessions in the convention center and there’s everything from speeches and skits to motivational speakers and things like that," Turner said. "There are also talent competitions, which is what I enjoyed the most."

Central's Emma Wayne, who will be an eighth-grader this year, was elected as an officer during the National Junior Beta Convention. She joined the Beta club during her seventh-grade year and was elected the reporter for Tennessee during the state convention back in the fall, said Lisa Dietrich, her mother.

"Ms. (Tara) Winton encouraged her to run and so we did," Dietrich said, referring to the theater teacher and Beta club sponsor at Central. “We could not have done it without Ms. Winton.”

Winton says Emma came to the school in sixth grade and was heavily involved in the school's drama program, which is when Winton first noticed her "presence." She eventually encouraged Emma to get involved in Beta and run for office. Once she agreed, Winton and other Beta students helped her prepare, Winton explained.

"She just got up there and was herself," Winton said of Emma. "She absolutely glows on stage — she has a presence."

Emma Wayne had to organize a campaign for the national reporter position and thankfully had the support of some other schools in Tennessee. She used the slogan "Wayne's World" — a play on her name and the hit movie from the 90s, her mom said.

Wayne is spending this week at a National Beta leadership camp, her mother said.

"She’ll have the opportunity being a national officer to travel this year to go to other states and be part of their conventions," Dietrich said. "She will go as a motivational speaker to help them make their clubs better."

In all, Central Magnet School took 63 students to the national senior convention this year. Of those, 55 performed in the group competition — a rendition of Creedence Clearwater Revival's "Rolling on a River" — to earn the third place award.

(BOTTOM) Eagleville students Maron Williams and Mitchell Turner each placed in the top 10 at the National Beta Convention held in New Orleans. Maron placed eigth in eighth in Agriculture Division I and Mitchell scored ninth in Science Division I. All students had to place in the top three of the state competition to qualify for the national convention.