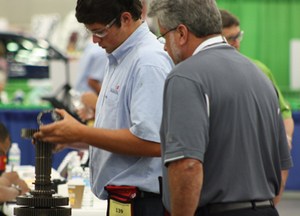 A trio of Career and Technical Education students from Riverdale High School – Tanner Duggin, Tyler Whaley and Joseph Hunt – were the only three students from Rutherford County to recently compete at the SkillsUSA Championships in Louisville, Kentucky.

“I’m so proud of them,” said Bryan Staats, who teaches automotive courses along with Mark Everett at Riverdale. “Just making it to nationals is a once in a lifetime thing.”

Hunt and Duggin graduated in May.

Whaley will be a junior this coming school year, and according to Staats, Whaley knows what he needs to work on if he intends to qualify for the competition again in 2017 and has already begun to refine those skills.

SkillsUSA “is a multi-million-dollar event that occupies a space equivalent to 16 football fields. In 2015, there were more than 6,000 contestants in 100 separate events. Nearly 1,500 judges and contest organizers from labor and management make the national event possible,” according to information on the organization's website.

Representatives from international companies — the likes of which include Caterpillar Inc., Cummins Inc., FedEX, Yamaha and Mercury Marine — serve as judges throughout the five days of competition, which took place from June 20 – 24.

The competition for each of the disciplines ran from approximately 8 a.m. to 5:30 p.m.

Hunt, Duggin and Whaley advanced through a regional and state competition to qualify for the nationals. It’s “pretty rare” for students to qualify, said Staats, who will be entering his 14th year at Riverdale.

Only one other student has ever qualified for the SkillsUSA Championships since Staats arrived in 2003.

“There was so much stuff they had to do, it was unreal,” said Staats, who along with Everett teach in excess of 110 students enrolled in automotive classes at Riverdale.

PHOTO: Riverdale's Tanner Duggin competes in the national SkillsUSA Championships held this summer in Louisville, Kentucky. Duggin and fellow Riverdale Warriors Tyler Whaley and Joseph Hunt were the only students from Rutherford County to qualify for the national competition.