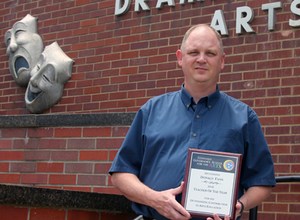 In only its third year of existence, Stewarts Creek fine arts instructor Donald Fann was chosen as this year’s Governor's School for the Arts Teacher of the Year, which annually recognizes one fine arts teacher from the state of Tennessee for their outstanding contribution to arts education.

“This is an incredible honor,” said Fann, who accepted the award in late June at a ceremony held in the Tucker Auditorium on the campus of Middle Tennessee State University.

Fann was accompanied by 11 Stewarts Creek students, who were among more than 1,000 students vying for 360 scholarships to participate in the exclusive program.

Fann gave credit for his achievement to the fine arts students of Stewarts Creeks by noting that it’s “a testament to (their) hard work.”

“Governor’s School has been a transformative learning experience for every student that I’ve been involved with,” Fann said.