‘FFA really is a life-changer for anyone that does it’ 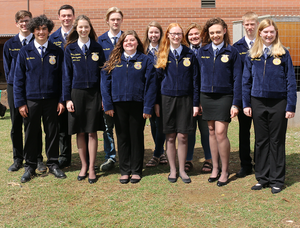 At a school renowned for its agriculture program, Garren Hamby is a rare student.

A sophomore at Eagleville School, Hamby is the first student Emily Marshall or Bruce Haley can recall whose father was a national FFA officer and whose mother was a state officer. Haley said there are only six national officers chosen each year from more than 600,000 members.

FFA is an intracurricular student organization for those interested in agriculture and leadership.

The Agriscience Fair event has been taking place for the past 10 years.

“We’ve had state winners in other things,” Haley said.

Hamby has invested time and money in developing the best possible herd of sheep over the past eight years.

He currently has a herd of about 50 sheep.

His agriscience project is looking at creating an opportunity for his female sheep to “go into breeding season” earlier than they normally would — sometime in August — “so if they’re born a bit earlier or bred a little earlier, they have the best chance for survival and to win.”

Hamby shows his sheep at various competitions throughout the year.

It is his belief that if they’re born earlier in the year, they will be that much bigger and stronger when he shows them in competition the following June and July. He’s been working on this breeding project for the past four years.

His parents both travel for work and he needs their help during the breeding process, so his project has also helped to “narrow down the window” to match their schedules “as well as make it a little earlier in the year.”

Hamby was one of two Eagleville students to place first at the state convention.

“This was my third state convention,” Hickman said, “I’ve always loved it and I’m a very competitive person in general.”

She was a state winner in the Agriscience Fair for social systems along with a second state title for dairy production entrepreneurship proficiency, while Falcofsky partnered with Zachary Walter to win the power structure and technical systems. Falcofsky also teamed with Samantha Walter, Leah Sharrar, Wyatt Blanks, Samantha Berhow and Makayla Blythe to win the state title for agricultural issues leadership development event.

Like Hamby and Thomas from Eagleville, all 11 winners from Stewarts Creek will compete at the national convention in Indianapolis in October.

“We hope with hard work and commitment we can succeed in winning a national championship,” Falcofsky said.

In its sixth school year, Gina Stewart, Amy Olt and Phillip Morgan have increased enrollment in agriculture and animal science classes to 330 students with 116 of those being FFA members. Olt said the school was built for two teachers, but because of the “amazing demand by students to take classes” they added a third teacher two years ago.

“We really push for STEM education in our program,” said Stewart, “and we are always going to bat to have the biggest and best program that we can possibly have at Stewarts Creek High School. There’s no doubt that we are always pushing our kids as hard as we can to get every ounce of potential that they have.”

Stewart added, “We are obviously extremely proud of our students and the work that they had done and the accomplishments that they’ve had.”

State and national FFA competitions may be rooted in agriculture, but they build leadership skills, teach students how to think critically and introduce them to potential career opportunities.

In Hamby’s case, Marshall said his projects allowed him to combine his passion for agriculture with strong academic skills — namely English composition.

“He gets to take that science component and put that with the English component because the research paper they have to write is college level. It’s intense,” Marshall further explained.

Hamby admitted, he initially got involved with FFA “to carry on the tradition. However, after the 2018 state convention, I really gained a passion for agriculture and FFA and I wanted to do it for myself.”

“FFA really is a life-changer for anyone that does it,” Falcofsky added. “It really gives you the opportunity to excel and succeed in whatever ways you want to and it gives you a chance to do whatever you want to do in life.”