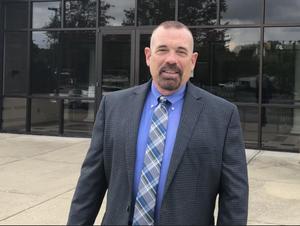 David Crim has been the safety director for Rutherford County Schools since January 2019.

He previously served as a longtime police officer and school resource officer in Rutherford County, and he has been working diligently with Director of Schools Bill Spurlock to ensure the district is maintaining safe learning environments for students.

Crim recently sat down to discuss school safety, a new threat reporting system for students, and ways parents can help at home.

RCS: You started as the district’s first full-time safety director in January, what have been your top priorities?

From a parent perspective, it’s important because the safety of your child is critical to the learning process.  If a child doesn’t feel safe at school, that child is not going to produce or feel empowered to learn. They’re going to be too busy worried about their safety.

That’s not something Rutherford County Schools is interested in doing. We’re interested in educating students safely and effectively.

RCS: The school district has launched a new threat reporting portal this school year that can be used by students or parents to report issues to the administration at our schools. Why do we need this ability?

CRIM: Unfortunately, the way things are now, with threats and bullying reports and things like that, kids are afraid to report. They’re afraid of retaliation or repercussions from other students.

We’ve contracted with a company called Stop It!, that’s an app you can install on your smart phone. The app provides an anonymous process for a child to report anything from bullying to threats of violence in a school. Not only that, once the report has been made, the child can choose to identify himself or not, but the administrators who receive the information can actually chat with this child to get further information which will help solve the situation quicker.

RCS: STOP-IT! is the name of the program we’re using. How does it work and what are some of the features?

CRIM: It’s available on any smartphone you have. Once you install it, it’s going to ask for a district ID code that can be put in (which is available at the schools).

One of the key points of this product is there is a triaging function. There’s an actual call center that processes these leads for us and rates them, any where from a low to a high priority. If we have something, like a suicidal student of an immediate concern, it will even result in a phone call to myself from the company.

RCS: Social media is powerful platform that helps people share information and experiences, but the flip side is that it also can be abused, especially when it comes to puling inappropriate pranks or trying to cause disruptions. What can parents do to help us ensure these activities are kept to a minimum?

Parents can do a whole lot for this.

First of all, having an understanding that the devices they’re providing to their children belong to the parents at all times. Under the law’s eyes, those are the parents’ devices and their children are using it with the parents’ permission. Even if that child is a little bit older and may have bought his or her own device, as long as they are a juvenile, it belongs to the parent.

The parent has a responsibility and a vested interest in monitoring a child’s social media activity, and I might add, gaming activity, because a lot of social media is taking place on the chat rooms for gaming, such as Fortnite and so forth.

Parents need to know the difference in the outcomes from some of these things, ranging from cyberbullying right on up to sexual trafficking, and it is not uncommon for sexual predators to be hanging out on these sites wanting to engage your child and then begin to groom them.

Unfortunately, that is a reality that we live in, and they are looking for those children whose parents are tuned out or not monitoring their children’s social media activities. I strongly encourage parents to have ghosting apps, which can actually watch whatever key strokes are being made by their children, particularly at the younger ages.

They should also have knowledge of what a vault is and how it is used by a child. Vaults are subdevices, they look like a calculator app, for example, and it may even run certain calculator functions, but when you input a certain pin code, it opens a whole other world on a child’s phone. They can hide things in them like photos, videos and even websites that are completely inappropriate.

RCS: What other new safety protocols and mechanisms have we put in place for the new school year? And what’s the deal with those concrete bollards that have been installed at schools?

We have implemented a key carding entry to all of our schools. It’s no longer possible to just walk up to a school and just walk in. We now have a visual system where visitors have to be cleared to enter a school. We contract with a company to make sure once they are in, they’re appropriately there.

As for the bollards, they’re actually devices which can block a vehicle from making entry to a school, an attack on a school or so forth. It also keeps the doors and the main areas safe from a random car that may hit a child as well. In schools where there’s lot of glassed-in areas, they are very critical to have.