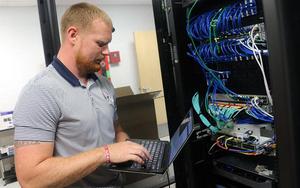 Matt Parker once gathered intelligence from electronic devices for the U.S. Army, now he serves as a member of the technology department for Rutherford County Schools
November 11, 2019

You may have noticed Matt Parker working in various schools in Rutherford County or as a member of the coaching staff at Oakland High School.

Parker serves as a computer technician for the school district, and one of his primary duties is to ensure WiFi networks are working efficiently to keep students and teachers online.

But most probably aren’t aware of Parker’s background in the military, and how his experience has made him a valuable staff member for Rutherford County Schools.

Parker is one of more than 125 current district employees who identified themselves as a military veteran, as part of a recent employee survey. The full list is included below.

He served with the famed 101st Airborne division, and did two combat tours in Iraq.

“My job was an all-source intelligence analyst,” Parker said. “We didn’t do a lot with computers, but we did do some stuff with signal intelligence. We gathered information through electronic devices.”

He added: “To be able to do that stuff, you have to have Top Secret security clearance, and so I can’t really say exactly how we did it, but we gathered information and intelligence off of electronic devices, phones, computers, any like that we seized off a detainee or someone brought in to us.

Parker was a member of a “Time Sensitive Target” team, he explained. They had to track targets using their electronic devices and to gather intelligence.  When a target’s device became active, they would respond immediately.

“We had 10 minutes to be in full gear and be out of the gate,” he explained. “We went on those missions many times.“

After the Army, Parker worked as a private contractor with the Army. It was during this time that he gathered much of his experience with computers. He was “bounced” between two Army deployment stations, one in Louisiana and one in California.

He worked with computers in the field and also trained soldiers how to use the equipment.

He later, in 2009, went back to Iraq as part of another private contractor assignment, where he stayed in a palace that formerly belonged to the Saddam Hussein family. Parker served as a “politics analyst” and specialized in the Kurds in Northern Iraq.

He joined Rutherford County Schools in 2011 after his father, who worked in the maintenance department, told him about a job posting in the Hardware Technology department.

“Whenever we place an access point in a classroom, we have to know how well that access point is going to propagate through these walls,” Parker said, while standing in Stewarts Creek High School.  “That way we know how to set the WiFi signal and strength.”

When Parker joined the department eight years ago, he suggested they buy a special tool that is used to measure WiFi signal strength and to identify any interference.

Parker works with other technicians to do site surveys at each school to improve efficiency with the WiFi networks. If wireless access points are too close and on the same channel, he explained, they can interfere with each other.

“At David Youree, the classrooms are in small little pods, and the walls, they’re not concrete, they’re all like drywall,” Parker said, as an example. “And so the WiFi signals were just blasting through there.”

Parker was also part of a team that added more than 120 new access points at nine high schools during last summer. They also programmed switches and virtual controllers so they can monitor a schools’ network for problems in real time.

A project of that magnitude requires multiple people working in unison, Parker said, quick to acknowledge the other members of the hardware staff.

It’s a mentality he learned from his former athlete days at Oakland, and of course, from his time serving the country as part of the Armed Forces.

“It requires all hands on deck,” Parker said.

Rutherford County Schools conducted a survey of employees earlier this month, and asked them to identify if they are a veteran. Following is a list of employees who responded, and we thank them for both their service to schools and to country.