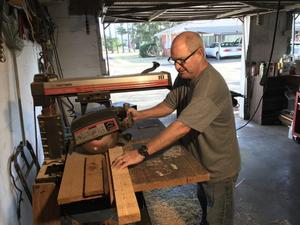 Two years. Three at the most.

That was how long Thomas “Tom” Delbridge III intended on teaching before he planned to “get out and do something else.” Two became three, which turned into 19. Then it was 33 and now 39 years later, Delbridge is retiring from Rutherford County Schools.

For the past six years, the former industrial arts teacher-turned-longtime administrator has worked as the coordinator of attendance at the Central Office.

He does enjoy the position.

But he also enjoys his family.

Over the years, he’s emphasized the importance of family when others have faced a similar decision. This time, Delbridge said, “I’m going to take my own advice.”

After serving 21 years in the U.S. Air Force, Thomas Delbridge Jr. was an industrial arts teacher for a short time before he ultimately “went to work for the State Department in Vocational Education.” His wife Barbara was a popular “old-time librarian” at Central Middle School.

“Don’t bend the pages, don’t break the spine of the book and don’t talk and chew gum,” her son recalled. “She was that kind of librarian. Libraries have changed.”

Unlike libraries of today, his parents never changed.

They kept an orderly household. Some might say strict.

But they have four successful kids — three of whom; Sherry, Richard and Thomas III became educators — and each of them, including Randy, who worked for the State Fire Marshall’s office and now sells real estate, are thought to be strong-headed and strong-willed.

In addition to their parents, the Delbridge kids grew up with aunts who taught and one of them living in Florida was a principal.

Tom liked woodworking in the garage with his father — “we always worked on stuff together” — and did the same with his maternal grandfather, who is remembered as a frugal man who would straighten out bent nails rather than “waste them.” But he let his oldest grandson use new nails when hammering two pieces of scrap wood together.

Even though he considered law school and becoming a trial attorney — they grew up in a house of independent thinkers who were “always arguing out point and making our point, trying to win” — it was with little surprise Tom wound up teaching industrial arts.

His sister Sherry Chaffin is a retired principal and his brother Richard teaches science at Siegel High School.

Tom started at a middle school before moving to a K-12 school, where he still taught sixth, seventh and eighth grade shop classes — “it was a fun time” building small engines and teaching kids to “wire stuff” — before becoming an assistant principal at Harris Middle School in Bedford County.

“I could get (students) in there and I could teach them a ton of math and science, but it wasn’t math and science. We built rockets and they wanted to know how high they went, so you could get them to do the trig on figuring that out,” recalled Delbridge, who made a career of seeking new challenges.

Transitioning from his shop class to administration was a “good change” that provided him with much needed “new challenges” that ultimately led to his being named principal of Siegel Middle School when it opened in 2001.

“Being a principal was a great job,” said Delbridge, who enjoyed the increased responsibility and the opportunity to impact students and teachers. “Superintendents let you run the school pretty much at your discretion as long as you did it right and had good results.

“They gave you that flexibility, so, yeah, I enjoyed that.”

Leadership and parenting alike is about establishing parameters.

His career with Rutherford County Schools has spanned four directors, including J. Hulon Watson, Harry Gill Jr., Don Odom and, most recently, Bill Spurlock for the past 18 months.

Delbridge said each of the directors knew he wanted to progress and helped him as much as he helped his assistant principals prepare to one day run Siegel Middle. That day came after a meeting at the Central Office when he complained about an issue schools were having with vendors.

He was told there was a position open and that he should apply for.

Although the title is coordinator of attendance, there’s more to the role than overseeing attendance. He oversees state and federal accountability; the student management system; scheduling, funding, collecting and storing data; special education and English as a Second Language accountability; and educating students in juvenile detention centers.

“It was a good opportunity for me to move on,” Delbridge said. “Every administrator I worked for, every one of them, knew that I wanted to move up eventually … and every one of them helped me grow and prepare me for the next position.”

Delbridge will be with the district through December 20.

Kim Edwards, who most recently served as an assistant principal at the newly opened Rockvale High School, will assume Delbridge’s role in January following the winter break.

“She’s going to do a fabulous job,” Delbridge said. “She’ll bring some new ideas and new energy into it and that’s good.”

For some, retirement is a tough word to say aloud much less follow through with it.

“I don’t mind saying it, but it’s a little scary for me because I have always worked since I can remember,” said Delbridge, who decided to “quit fighting the clock” and asked himself what his newfound downtime would look like.

He and his wife Renee are planning a vacation.

He plans to visit his daughter in Boston.

Together, Tom and Renee — “her personality makes up for everything that mine’s not … she’s got such a good heart, so together we’re both better” — have six grandchildren and, he said, “As you get older, I think you start looking for the opportunity to spend time with your family … and not try to pack everything into two days.

Tom plans to clean up his father’s old work area where all of his bench tools have sat relatively unused. Like his father, he’s still an old school shop teacher at heart. Only now he’s looking to build furniture and maybe even eventually build a place down by the lake.