A HUNGER TO LEARN AND SERVE 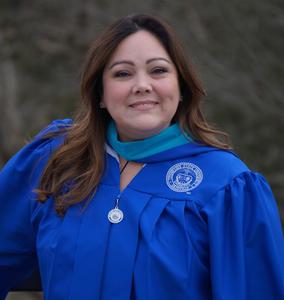 Tiffany Johnson had no intentions of earning a master’s degree.

As a matter of fact, she resisted the idea the whole time she’s been attending Tennessee State University.

Her interest in taking graduate-level coursework was driven by a curiosity to learn new things and, yet, 10 years after applying to the school and enrolling in her first class, Johnson earned a master’s degree in public administration with a certificate in nonprofit management.

“I’m still hungry to learn more,” said Johnson, indicating that in spite of earning a degree, she is more likely than not to enroll in more classes, “and I like a good challenge.”

Johnson, who is in her third year as a member of the Rutherford County School Board and is currently serving as vice chair, added, “I picked some classes and started. I didn’t know what I was going to do. I was just excited to take some classes just to keep learning.”

Her graduate level coursework began with a desire to learn and understand more about policy. She was working for the Tennessee State Legislature, which paid for one class every semester, and eventually discovered an interest in nonprofit courses.

“That’s where I got real hungry,” recalled Johnson.

In addition to taking other college classes at TSU and sitting in on seminars — she also earned a license in real estate — Johnson is an avid reader and a viewer of documentary films.

After leaving the legislature and prior to being elected to the school board, Johnson worked two years as the director of the Sam Davis Home, but ultimately left because she “wanted to help people who needed help” and did not feel that was the type of nonprofit her Sam Davis experience was providing.

She was originally led to the Sam Davis Home when she wrote a strategic plan for them as part of some graduate coursework and was then offered the position by a board member.

“I went from policy focus to service,” said Johnson, who took a few semesters off to focus on her family and together they participated in volunteering for Meals on Wheels.

“I just had these random things in my mind. I want to do this, or I want to do that, so I just kept going, taking classes … and I’m intrigued by it. I learned something new and somewhere it fits in.”

Johnson laughs about the time one of her daughters — she has seven children — told her, “By the time you’re done, there won’t be anything left to study.”

At the time, she thought about it and replied, “That would be good. That’s me.”