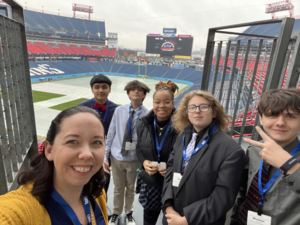 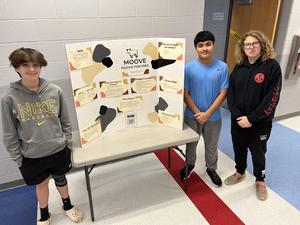 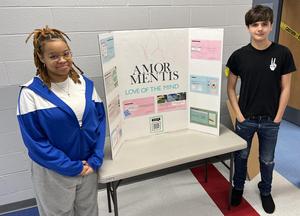 #RutherfordFaces: Two teams from RFMS compete as finalists at contest

One of the teams, for its project called MOOVE, won the middle school competition. Those team members are Cristian Perez, Luke Baynes and Joshua Fulghum.

The other team, made up of Braxton Johnson and Selah Mosley-Powell, competed as finalists with their project called “Amor Mentis: Love of the Mind.”

“It’s a project to help kids with mental health,” Selah explained. “It’s an app that will support kids so we can have better adults in the future.”

Her teammate added: “It’s basically a community that will be able to connect people and chat with other people,” Braxton said. “It’s a way to help people overall.”

The students have developed their apps as web-based, which means they can’t be downloaded from an app store yet. But they do have aspirations to see their projects come to full fruition.

The competition was produced through a partnership between the Tennessee STEM Innovation Network and Battelle Education, said Rocky Fork Middle STEM teacher, Bobbie Meredith, who served as the sponsors for the students.

“They are really focusing on the sciences this year and trying to get those standards in the middle school,” Meredith said of the competition. “So this was an opportunity for students to play with computer science, app development and solve a problem, because my class is all about solving problems. It was a good opportunity for them to get creative.”

When asked about their project, team MOOVE, quickly launched into its sales pitch and the experience at the competition. The team’s app works like other ride-share programs, but focuses specifically on student-athletes who need help getting rides home from athletic practices and competitions.

QUESTION: Tell me about your project.

Cristian: MOOVE is non-profit company that’s main target is to get children to sporting events safely and efficiently.

Luke: And MOOVE was created because one in five American children suffer with obesity and 43 percent of teens quit their sports because they don’t have a ride. We want to make sure kids can get to their sports safely and soundly so we can ensure their mental and physical health is in check.

Luke: Safety shouldn’t be a problem because we make sure our drivers go through many safety checks such as their criminal record check, their name, their date of birth, their phone number and even a fingerprint check.

Q: What did you win?

Christian: We got a lot of little things like this (points at his bracelet) and some hot cocoa.

Joshua: We got a medal.

Q: Where did you come up with this idea?

Cristian: It was a problem in Ms. Meredith’s room.  We had to think about problems around the world that we could solve with science. So we made MOOVE. Everything is creatively done, like the logo and the cow. MOOVE is (pronounced) “MOOOOO” like a cow.

Q: What’s next for your company?

Joshua: We’re going to continue advertising it throughout the U.S. to try and get more advertisers and sponsors, and we will continue to update our app.

Q: What are you hoping to accomplish?

Cristian: In the future, it will help reduce obesity maybe and increase athletic statistics, like produce more athletic people, and reduce depression because 70 percent of kids in America have obesity which can lead to depression.