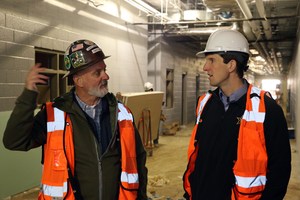 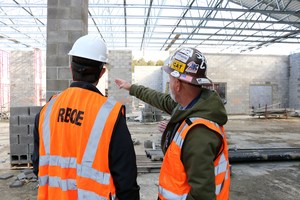 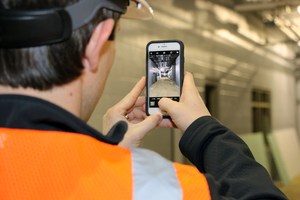 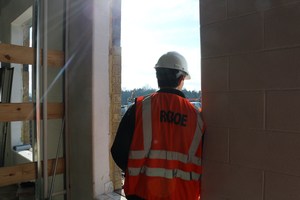 For the first time in nearly 11 years there were no students to greet on Monday morning.

It was anything but a typical start to another week.

There wasn’t a staff meeting.

There wasn’t even a school for Dr. James “Jimmy” Sullivan to go to. That in itself took an hour for him to get used to.

Sullivan was hired in late December as the principal for the soon-to-be opened Rocky Fork Middle School. His first day was Feb. 6, but construction on the Rocky Fork facility isn’t expected to be completed until late July. So he walked into the central office for Rutherford County Schools and did the most logical thing he could think of.

Four days later, he made a list of other lists he needs to make.

“There’s a lot to do before I move into the building,” said Sullivan, who talked about simple things like designing a logo as well as solving complex issues like class schedules and other operational frameworks that entail working with various departments within the district.

For instance, eventually he needs to work with the transportation department to decide on the best bus routes and schedules before and after school. He thinks a lot about how they will eventually get 1,000 kids to a campus that – as of today – doesn’t have a parking lot much less a paved entrance.

On Thursday morning, RCS project manager Trey Lee took Sullivan over to officially tour the school for the first time.

One day soon, Lee and Sullivan will sit down with a calendar and schedule everything happening at the facility, including the need for a lead custodian to start working in May and when the mail will start being delivered. Lee already mentioned the ribbon cutting ceremony will need to be scheduled.

“It hasn’t hit me, what do I do,” said Sullivan, with regard to starting the entire process of opening a brand new $37 million school from square one. “It’s how do I prioritize and organize things.”

In the meantime, he has a temporary space at the central office.

He’ll be working out of that room for five months.

By the end of his first day he had hung a few photos of his family, college degrees and lined up several personal books on a shelf. You can tell a lot about a person by the books they choose to read. There’s “Good to Great” and a collection of books about leadership. Laying on top of a short stack is one called “The Lombardi Way: 26 Lessons from Vince Lombardi, the World’s Greatest Coach.”

Sullivan certainly wouldn’t be so brash as to say he embodies those rules, which read more like virtues than rules, but he certainly strives to live up to them.

The Rutherford County native was “thinking big picture” when he sought out his new position, and when he got the job he definitely “looked the truth straight on” when it came to letting his previous school – he was principal at Harris Middle School in Bedford County – know he was planning to continue his career at Rocky Fork Middle School.

“That was the hardest conversation I’ve ever had to have in my career,” recalled Sullivan, as his eyes filled with tears. “They had no idea. It happened so quick.”

Back in mid-December, Sullivan interviewed with RCS on a Tuesday.

He spent all day Wednesday and most of Thursday at a conference in Nashville, which is where he was when he got the call asking if he could come back to Murfreesboro on Thursday at 4:15 p.m.

He had interviewed with Director of Schools Don Odom and two assistant superintendents – Richard Zago and Paula Barnes – on Tuesday. All three greeted him in Odom’s conference room on Thursday for what Sullivan thought was a second interview. He was prepared to talk at length about his vision and what his plan would ultimately be moving forward.

The group talked briefly about their previous meeting.

Then Odom cut to the chase and offered him the job.

“It was great news to hear,” Sullivan said. “Honestly, it was a little bit of a whirlwind. I wasn’t expecting it.”

Then he thanked them.

It was an exhilarating moment.

“To open a new school is a principal’s dream,” Sullivan said. “It really is.”

Amidst the excitement he began to think about the difficult conversation he was going to need to have first thing Friday morning. The one where he told his staff – 75 percent of whom he had personally hired over the past four years – that he would no longer be commuting to Shelbyville. It was the conversation in which he had to tell them he was leaving.

The next morning, he called for a staff meeting at 7:15. It was an abbreviated two-hour school day on the cusp of winter break.

“I talked for a couple of minutes and it took me a couple times to compose myself,” Sullivan said. “That was hard and it still is hard.”

“When you form those relationships,” he explained, “it’s hard, especially right in the middle of the holidays. It’s the last thing you want people to think about when you actually want them to relax, especially as stressful as education is. You want them to relax and enjoy the break and I’m not sure that was the case. And I caused that, and it’s hard to live with.”

One of Lombardi’s 26 rules is “write your character.”

You don’t have to know Jimmy Sullivan – as he likes to be called – for any length of time to know he’s a good man.

He embodies several other Lombardi traits: be prepared to sacrifice, be mentally tough, lead with integrity and ask yourself tough questions.

He did all of those things on that Friday morning.

Now he brings them with him to Rocky Fork Middle School.

Sullivan describes himself as “extremely organized.”

He’s a taskmaster with a relentless work ethic.

Sullivan hasn’t had a full night’s sleep since he was hired. Then again, that’s been the story of his life.

He was born in Murfreesboro and other than two years spent in Wichita, Kansas, he was raised in Rutherford County. He attended Walter Hill from kindergarten through the eighth grade and then graduated from Oakland High School.

He earned his doctoral degree from Lipscomb University in 2014 in “Learning Organizations and Strategic Change.” He serves as an adjunct professor at Lipscomb and previously taught and coached boys’ basketball at Blackman Middle School from 2006-2011.

He spent one year as the assistant principal at Harris Middle School before being named principal for the past five school years.

While he’s making a career adjustment, his family – he has pair of young children and a wife of 10 years – will maintain the same house.

At home, Sullivan is an avid reader.

As with the Lombardi book, he mostly reads non-fiction

In an effort to take his mind off things, he joked, “I think I’m going to start reading a little fiction.”

In the meantime, he’s already referring to Rocky Fork as “we.”

He’s already started the interview process, but he hasn’t crossed that off his list or put a checkmark next to it. Whoever he hires, they start on Feb. 27.

He and this unnamed-person are going to have to literally work side-by-side in his temporary office. He’ll need to be able to trust them and they are going to become his confidante. This person is also going to be familiar with everything there is to know about Rocky Fork Middle School before they even have any students or faculty.

This person, as Sullivan described, needs to be special.

“The secretaries are the face of the school,” he explained.

Saturday he’ll be at Blackman High School for the RCS Teacher Recruitment Fair.

Although the hours are officially 9–11 a.m., Sullivan said he plans to stay for as long as it takes to talk with everyone waiting to speak with him. He’s already heard from prospective teachers who are coming from out of town and he said he’ll have people meet him at the central office if need be.

Saturday afternoon, he’ll cross that item off the list. By then, he’ll probably add a few more action items to the list.

He said his goal at the recruitment fair is not so much about filling the positions – every imaginable position is open – so much as he sees it as an opportunity to let the public know what the identity of Rocky Fork is going to be.

He wants to impress college graduates interested in teaching.

He wants to impress existing teachers interested in transferring from other districts as well as from within RCS.

He wants to impress parents and students.

In fact, he’s hoping families who have the option to use the grandfather clause to remain at their current schools will be impressed enough to choose Rocky Fork Middle School.

“I’m a firm believer in the importance of middle school,” said Sullivan, who’s only ever worked in a middle school. “I feel like it’s the last chance to make an impression on a life that may or may not go in a direction it needs to.”

PHOTOS / KEITH RYAN CARTWRIGHT
First Two Photos: RCS project manager Trey Lee took Dr. James “Jimmy” Sullivan, the newly hired principal of Rocky Fork Middle School, on a tour of the facility. Sullivan started work this week. The school is currently under construction, but will open in time for the 2017-18 school year. Third Photo: Sullivan takes one of many photos during his tour of the school. Fourth Photo: Before leaving, Sullivan paused to gaze out the window of what will eventually become his office.