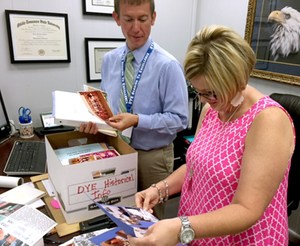 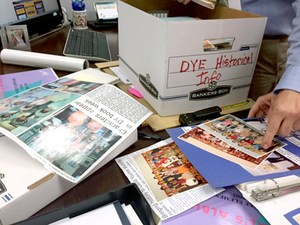 SMYRNA — There was talk of a nondescript cardboard box.

No one knew exactly of its contents – nor were they even sure of its whereabouts – but this wasn’t just any box. It was believed this particular box contained the history of David Youree Elementary School.

With the 40-year anniversary of the school approaching, Scott Bolden and Felicia James started asking around. They talked with longtime teachers and staffers, and then a librarian at the school remembered there was a box, perhaps the box they had been looking for, that had been tucked away in the top of storage cabinet.

There were photos of the late David Youree from his college graduation and his retirement party following a career in education. There were newspaper clippings dating back to 1976 when the school first opened. There were three-ring binders filled with documents, including then RCS Board of Education’s reason for naming the school after the longtime educator.

The letter, dated Oct. 24, 1975, read: “During an era when man realizes the great importance of educating his youth, we take time to remember men and women who have dedicated their lives to this task.”

It continued, “One such man has spent four decades in Rutherford County as an educator.”

They were, of course, speaking of David Youree.

The letter, which was sent on behalf of then-Superintendent Mr. M. B. Brandon, contained 20 signatures, including current Director of Schools Don Odom.

Less than a year later, Odom was named the first principal of David Youree Elementary.

“I need to look at that when I’m there,” said Odom, who hasn’t seen the box in a long time. “That should be interesting.”

This particular box, which is of special meaning to those who have a history of their own with the school, proved to be an invaluable resource for Bolden and James as they planned this year’s celebration, which is scheduled for Saturday morning.

There will be a special ceremony Saturday, Sept. 17 at 10 a.m. and will be immediately followed by a carnival that begins at 11 a.m.

“That was helpful,” said James, who is the assistant principal at David Youree Elementary.

Bolden, who has been the principal for the past three years, agreed as the two laughed.

“It was very helpful,” he added.

On more than one occasion, Bolden and James have both got caught up in thumbing through the contents of this box, but one afternoon stands out.

This particular time, they went through the contents with Mary Ann Rogers.

Rogers has been at the school since 1980 and has worked under all seven principals in the school’s history.

“I don’t know what it’s like to be anywhere different,” said Rogers, who even did a year of student-teaching at David Youree before being hired full time in January 1981. “I’ve never had the desire to move. I’ve always been happy here.”

Rogers added, “It’s a family. It’s a second home. We spend so much time here.”

In fact, Rogers spent 22 years in the same classroom before moving across the hall when the pods were organized. Since then she’s moved during each of the past five years and is currently in a trailer "portable" classroom alongside the main building.

After years of teaching third, fourth and fifth grades, Rogers is currently an interventionist.

While some things at David Youree Elementary have never changed — namely Rogers’ longevity — other things, like enrollment numbers, have drastically changed.

Naturally, for Bolden and James, when it came to the matter of where to start planning Saturday’s event they sat with Rogers.

They compared the names Rogers could recall with a list Bolden and James had found inside the box that had been put together by Dr. Lynn Patterson, who was principal at the time of the 30th anniversary. As they emptied the contents, Rogers would reminisce in greater detail about some of the school’s history.

“It was really neat to see what was inside of it,” James said. “It can really take you back.”

James added, “I just felt like it captured some of those things that happened.”

And then Rogers referred them to a retired teacher named Alice Elkins, who still lives nearby. Elkins has a recipe box filled with alphabetized filing cards for every teacher, teaching assistant, administrator, staff member, custodian and secretary that worked at the school from 1976 to 2010.

The cards are color-coordinated according their role, and while they do not necessarily consist of every address or current phone number, it lists the dates everyone was at the school along with their roles.

“That’s just how Alice is and still is,” Rogers said.

If the school is known for its family-like atmosphere, Elkins is known as the sweetest former teacher to have been at David Youree.

“It was a great staff there and they had a good connection to the school,” Odom said in regard to Elkins’ meticulous list, which illustrates the care his original staff had for the school, “and the importance of the unity within that faculty—common vision, common goals.”

Odom indicated he’s kept in touch with many of his staff members from the 20-plus years he spent at David Youree Elementary and is looking forward to seeing them again on Saturday.

She said a lot of them keep up with one another on Facebook, but it will be nice to see them in person. Not even the immediacy of social media can replace the opportunity to give one another a hug.

“I’m wondering how many former principals will be able to show up,” said Rogers, whose great-aunt, Ruth Ward, was Odom’s first grade teacher. “He started off well and had a good educational background.”

Odom noted that Richard Zago, assistant superintendent of curriculum, was a student-teacher at David Youree and later returned to teach at the school. Trey Duke, who is currently the instructional technology and RTI coordinator for RCS, got his start at the school as well.

In fact, Duke’s first-year teaching mentor was Linda Mayes, who would later become his mother-in-law when he married Mayes’ daughter Leslie. Though she never attended David Youree Elementary, the younger Mayes said she practically grew up at the school.

Because of stories like that, James is also looking forward to seeing past teachers, like Rogers, Elkins, and Mayes, reunite.

“They used to spend every weekday together,” James said, “and, like we said, it’s a very family-oriented place.”

Invitations to all the former teachers, administrators and support staff were sent out and Saturday is a reunion as much as it is an anniversary celebration.

The public is also invited and encouraged to participate in honoring David Youree Elementary School’s past.

Youree’s widow, who taught at the old “Rock School” back when her husband was principal, was at the 30th anniversary but has since passed away. Unfortunately, they don’t know of any other family members who remain in Rutherford County or Middle Tennessee.

As for the box, it is now sitting under Bolden’s desk.

He’s added three-years-worth of clippings and other assorted materials.

“We’re adding things and dating them,” Bolden said of more recent items being added in the box, “and adding them to the binder so whoever takes over after I leave one day has those things.”

David Youree Elementary School Principal Scott Bolden and Assistant Principal Felicia James look through a box containing historical records and news clippings about the school. Officials will be celebrating the school's 40th anniversary on Saturday, Sept. 17, beginning at 10 a.m. with a ceremony and a carnival. The public and past teachers, students and parents are invited to attend.