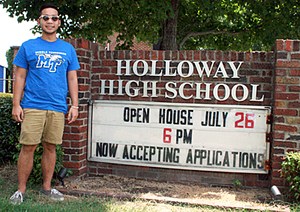 In his own words, Austin Kittavong wanted to get a head start with his life when he made what might have seemed like a surprising decision to enroll in Holloway High School.

His choice of schools paid off.

Rather than students enrolling in seven credits taken during a year’s time, Holloway students can enroll in four credit-hours per semester using what is known as a four-by-four block schedule.

Holloway’s block schedule allows students such as Kittavong to finish the required 23 credit-hours needed to graduate within three years. Through the school, students can finish early without relying on night or online classes – both of which are available to all students throughout the district.

“I’d been hearing about it,” said Kittavong, who plans to pursue a pre-nursing degree from Middle Tennessee State University. “I wasn’t interested in graduating early because I loved Riverdale and I loved my friends there, but, I don’t know, I was in deep thought one night and why stay if I can get it done now.”

Taylor Geffre also gradated early, in 2015, and was accepted to Motlow State Community College and the University of Tennessee at Martin. The top two graduates, including Kittavong, from this past school year finished a year early and both are enrolled at MTSU for the fall.

Winter Flores is transferring to Holloway this fall. In an essay, Flores wrote, “I need a place with teachers who care in a smaller school setting. I need a place of self-discipline, productivity and goals that I can set and achieve. There’s not another school that I believe can be everything I require.”

Holloway Principal Sumatra Drayton was not mincing words when she pointedly referred to the school as “the best kept secret in Rutherford County.”

But not for long.

According to Rutherford County historian Greg Tucker, the Holloway building on South Highland Avenue was dedicated in December 1929. It opened as the only all-black city school and then became a county school in 1951.

Numerous additions were made to the original building and latest addition — which notably was designed by Tucker’s father Burney — was built in 1962. It opened two years later in ’64. That year, the county began what Tucker termed a “progressive” consolidation of Holloway with Central High.

The integration was completed in 1968 and Holloway was closed before reopening in 1973 as a vocational high school.

“It was for kids who needed a skill,” said Drayton, who added, “but it’s never, to my knowledge, been a school where you were mandated or remanded because of (poor) academic issues. It’s never been, but that’s what people think.”

For years Murfreesboro native Kim Hughes had a negative perception of Holloway until visiting the school and seeing firsthand what Drayton had brought to the now 87-year-old school.

Drayton recruited Hughes as a teacher.

No one is zoned for Holloway. Instead it is a school of choice.

According to Drayton, who is beginning her fourth school year as principal at Holloway, there is very little drama that comes with attending a school with right at 100 students. Drayton and Director of Schools Don Odom have set an enrollment goal of 150 students for 2016-2017.

Holloway is hosting an open house for all interested students and their parents on Tuesday, July 26 from 6-7:30 p.m. Drayton and her entire staff will be on hand to answer questions and will be accepting applications.

Drayton is hoping this year’s open house will lead to increased enrollment numbers.

Holloway, which in recent years has had 18 to 20 teachers, features a one to 15 ratio in class with as few as 12 students and no more than 18.

“Here they helped you step-by-step and allowed you to learn what was being taught,” Kittavong said.

She added, “Our size affords us those opportunities.”

It’s a relationship that succeeds and by its virtue students succeed.

The teachers and students develop relationships that will last a lifetime and is precisely why Drayton personally interviews every student accepted to attend Holloway.

“I want to have that connection to them,” said Drayton, who wants to see students do well and it’s the same reason Hughes views teaching at Holloway more rewarding than other schools.

“You see the difference,” Hughes said.

It’s also why Flores is transferring from Central Magnet School for her junior and senior years.

“She doesn’t want to just be known for her numbers,” said Drayton, who has been the principal at Holloway for the past four school years. “She wants to connect.”

As much as Drayton wants to personally connect with each and every student she also insists the students understand what is expected of them at Holloway.

If a student is missing from class, parents will not receive an automated message letting them know. They’ll receive an actual courtesy call from Drayton or a staff member.

Drayton said it’s difficult for students to hide and disappear in the crowd.

“If you can’t read, we will find you,” Drayton confidently said. “If you’re struggling with math, we see you immediately and we address it. We’re the school that can give students an opportunity to catch up, if they need to catch up, or we have kids who decide they want to accelerate.”

And then there are success stories like Victor Cervantez.

No one ever expected him to attend high school, much less graduate, Drayton said. And yet Hughes said once Cervantez enrolled they had “no problems, no trouble” with him.

“We don’t like to give up,” Drayton concluded, “and every teacher in here has to be as committed. We fight until were exhausted for these students.”