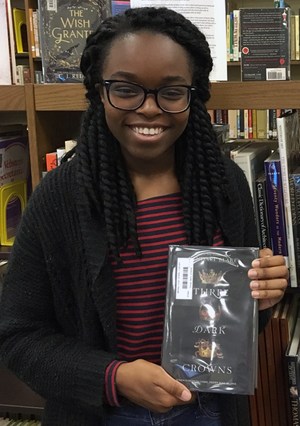 The Southeastern Young Adult Book Festival — more commonly known as SEYA — will be held March 8-10, 2018. SEYA was created and organized by local librarians. Leading up to the event, we have arranged for eight Rutherford County Schools’ students from throughout the district to interview authors for a question-and-answer style story. These stories will publish on Fridays over the next few months before the festival.

Kendare Blake is the New York Times Bestselling author and mastermind behind the Anna series, Goddess of War series and her most recent novel Three Dark Crowns and its sequel One Dark Throne.

When she's not writing, Blake prides herself on her mad skills at the celebrity challenge game Six Degrees of Kevin Bacon and her devotion to Game of Thrones.

Blake, with the help of her husband, raises their four cats and dogs in Kent, Washington.

In her first installment of Three Dark Crowns, Blake writes of the haunting destiny of the three young queens of Fennibirn Island. In every generation, the island's queen gives birth to a set of triplet sisters destined to kill one another until the last sister stands.

These sisters, each born with a unique magical prowess, must ignore the blood bond that unites them and value the throne above all else.

SEYA will be my first book festival experience and the thought of being in a room filled with fellow bookworms and renown authors fills me with a mix of euphoria and pride.

Books have been a big part of my life since I became an avid reader in middle school as a way to fill those long summer days.

As a bookworm, (interviewing Ms. Blake) is something I could only imagine would happen to me. It’s been a surreal experience.

JENNIFER HUDSON: Three Dark Crowns is a beautifully written novel, with a dark and mysterious island and complex power system. How is your initial writing process when coming up with a story? When you have a book idea, do you initially plan out the entire plot with its characters and their developments or do you simply begin with an idea?

KENDARE BLAKE: My ideas show up once every few years. And it generally takes a few years of them rolling around in my head before I'm ready to write them. There have been exceptions, but that's how Three Dark Crowns was. I had the idea in spring of 2013 and didn't start writing until at least a year later. By then I had the characters and the main conflicts down, but I didn't know how the story would end, or how anything would go. Generally, I just find the beginning, and start writing, and it fills in from there. Like magic.

On Fennibirn Island, the naturalists you've created have familiars, animal companions that compliment and truly highlight the naturalist's personality. What kind of familiar do you picture yourself having if you were a naturalist on Fennbirn?

Nothing that had to spend a lot of time at sea or in the water. I'm not a fan of it. The ocean is pretty to look at but I don't like to touch. Something lazy, really, that liked to eat a lot. One of those little pigs, perhaps? Or a really chubby coyote?

Three Dark Crowns is a very female-driven novel, with its main protagonists being three female sisters and their "trainers" so to speak also being very strong and in charge ladies. When writing this novel did you draw any inspiration from any particular female figures in your own life?

Not really. I'm sure I drew inspiration from my favorite female characters, but only subconsciously. I never like to base any of my characters on people I know in real life because it makes the characters feel less real to me. Less their own people. With the exception of Luke, who owns the bookshop and has the rooster familiar, he and the rooster are real.

Arsinoe, Katharine, and Mirabella, the triplet queens of your novel, each deal differently with the prospect of having to end their sisters' lives and have such unique and individual personalities. When writing these characters did you identify more with one of them than the others?

I thought I would, but as the novel went on I came to understand them all. Initially I understood Mira the least, raised as a favorite, the Chosen queen, groomed and cared for and quite religious, but as she's tested over the course of the book and comes to realize certain things about her situation, she changed, and I began to understand her more. Arsinoe I think I started to understand less ... or rather, started to agree with less. She's so stubborn!

Throughout the novel, we see the sister queens and their surrounding factions having to adapt to unexpected curveballs and ploys sent their way. Have you as an author had to deal with curveballs in the writing world?

There are curveballs in everything, I suppose. Every review from every reader who hates your book can feel like a curveball! And just recently my streak of being harassment-free ended (feel free to ask about that when we meet, I'm quite amused by it really), which is a shame, but for the most part, I've been pretty lucky. My books have found their audiences, and I've gotten to work with people who are savvy and kind. Honestly, I don't want to talk about it too much for fear I'll jinx it.

Three Dark Crowns takes three young girls and places them in situations where they have to question their relationships and figure out the core of who they are, questions that youth of today have to face—albeit the sisters deal with a more sinister destiny. What is it about young adult fiction that draws you to write novels in this genre?

If I think about the things that I love, and I mean LOVE in all caps, so much of it is stuff that I discovered when I was an older teenager and young adult. Those are the years when I became obsessed with things. Harry Potter, Sailor Moon, 80s movies, Buffy, the Iliad. It's not that I can't love things like that anymore, but I do love fewer. And those things informed who I am as a person and a writer. So I would be more than thrilled if my books were that for some other young adult. I'm thrilled to write for the age of obsessions.