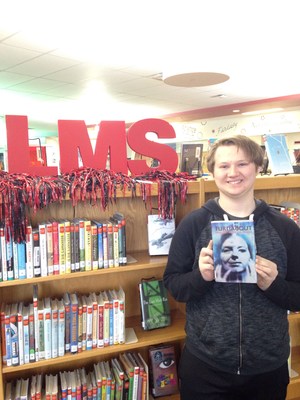 The Southeastern Young Adult Book Festival — more commonly known as SEYA — will be held March 8-10, 2018. SEYA was created and organized by local librarians. Leading up to the event, we have arranged for eight Rutherford County Schools’ students from throughout the district to interview authors for a question-and-answer style story. These stories will publish on Fridays over the next few months before the festival.

It was the allure of meeting authors that brought him to SE-YA Book Fest last year and it’s why he already made plans to attend again in March.

So when he had the opportunity to interview Margaret Peterson Haddix, the eighth-grader from LaVergne Middle quickly put together a list of questions to ask The New York Times best-selling author of more than 20 books for kids and teens.

“It is a fantastic opportunity to learn something about someone that has provided amazing entertainment that has greatly affected your life,” said Clayton, who has been reading since a very young age.

“Since then I have read so much. Now I like to read the classics. The way it has affected me was through how I have appreciation for art, because books require time, you learn to respect and enjoy it.”

Clayton recently interviewed Haddix in advance of her SE-YA appearance.

Derek Clayton: How do you get your ideas?

Margaret Peterson Haddix: All of my ideas have been inspired by something in real life —sometimes it’s a news story; sometimes it’s something that happens to me or to someone I know. One of my books was inspired by a birthday card, and another by a child’s puzzle, so I like to say that ideas are everywhere.

And often the ideas change a lot from what happened in real life to what happens in a book once I’ve “fictionalized” the idea.

How many ideas have you not used?

Interesting question. It’s a little hard to quantify, since a lot of my ideas that I haven’t used (yet) are more like half-ideas, or quarter-ideas, or just infinitesimally tiny seeds of ideas that might ultimately grow into something huge, or might stay infinitesimally tiny forever. Sometimes I figure out what I want to write in a book by putting together two or three ideas that I thought of independently. And sometimes I have an idea lurking in the back of my head for years before I figure out what it can lead to.

How many times have you rewritten a book?

By the time one of my books comes out, I’ve probably gone through it at least 10 or 12 times, and I’ve made changes each time. But after the first couple revision cycles, most of the changes are really tiny — changing a word here and there, fixing clunky phrases, etc., not doing massive overhauls. With my very first book, I threw out the last third or so of the book two or three times and almost completely rewrote it. With one or two others, the first and second revisions on the book were so extreme that it might have been easier to just write an entirely new book. I try to plan well enough before the first draft that the second, third, fourth, etc., drafts won’t be so challenging. But sometimes it’s unavoidable.

Do you have a writing process and if so what is it?

Some days I don’t feel like my writing process is much of a process — a lot of the time, it feels more like just wandering around in the wilderness, trying to figure out which way is up. I’m at that stage with the book I’m working on now. I do try to plan ahead a lot, but I also often think of even better ideas as I’m going along, and of course I want to go with the best idea.

Do you have a specific place you like to write in?

I have an office in my home, and that’s usually where I write. I use a laptop so I could go practically anywhere to write, but I like working with a large monitor, so I can see the whole page I’m writing, not just bits and pieces.

This is an odd one, but how many publishers rejected you before you became a best-selling author?

That is a very reasonable question, since most authors quickly learn that persistence is a very important trait to have when launching a writing career. My first book was rejected about a dozen times before I got an agent; after that, fortunately, she was the one keeping track of rejections, not me, so I’m not sure of the total number before the book sold. And I should add that my first book did not instantly become a best-seller — that route was a long process.

Do you have any advice for new writers?

To learn to be persistent.

Actually, long before writers need to be persistent about trying to get published, they need to be persistent about trying to make their work as good as possible. That usually involves a lot of thought and planning, hard work both writing and rewriting, and seeking advice and constructive criticism from others. And in the midst of all that, I think it’s important to sometimes just have fun with writing and not worry about how it’s going to turn out.

How did you develop your writing style?

By one, reading, and two, writing. That sounds like a flippant answer, but it’s true. I absorbed so much from reading other writers’ works, and then writing a lot myself is often like practicing to figure out how I want to write, and what I want to say.

At what age did you know you wanted to become a writer?

I started thinking about it in third grade. But it seemed more like a dream than an actual goal at that point.

Who inspired you to become a writer?

All the great writers I read as a kid.