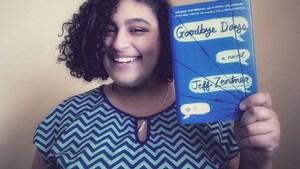 The Southeastern Young Adult Book Festival – more commonly known as SEYA – will be held March 8-10, 2018. SEYA was created and organized by local librarians. Leading up to the event, we have arranged for eight Rutherford County Schools’ students from throughout the district to interview authors for a question-and-answer style story. These stories will publish on Fridays over the next few months before the festival.

Do you have that one event that happens every year that you look forward to attending? You work so hard just to feel accomplished enough to go.

SEYA Book Fest is that to many of us students.

What’s not to love? It’s a book festival and I get to meet my favorite authors, discover new books and fangirl with other readers about the books we’ve read.

My friends and I are in AP courses and advanced classes, and the SEYA Book Fest is literally the light at the end of the tunnel for us. It's also the most amazing experience of the year for readers and if you're not into books — by the end of the event — you'll be inspired to pick up all the books and read them.

Authors are like rock stars to me because I aspire to be a writer.

This year, through SEYA, which I’ve attended the two previous years, I got the amazing opportunity to interview Jeff Zentner.

He is one of the many awesome authors that will be attending this event and he is also a musician who lives in Nashville. I got to read his latest book called "Goodbye Days" and it has become one of my favorites.

It ripped my little heart into a billion pieces and put it back together, and honestly, what else could you ask from a book?

He has also written another book called "The Serpent King," which I've heard rips your heart into a billion pieces too. Both of these books are about very powerful subjects.

"Goodbye Days" is about a kid who loses his best friends in a car crash and is blamed for it by most people around him.

"The Serpent King" is about a kid who is struggling to see a future for himself when everything seems to be holding him back, like his family's very extreme faith and his minster father being jailed for something that definitely should strip his father of his job title. At the same time, everyone but a few are against him for his father's faults.

That's a little about SEYA, Jeff Zentner and his books, so here are some questions I asked him.

Marteen Ebrahim: What was an early experience where you learned that language had power?

Jeff Zentner: When I was in junior high, I wrote my grandma a letter for her birthday, not really putting much time into it, sort of off-the-cuff. But she was so moved by it she called me crying. That’s the first time I understood how powerfully words can touch people.

How do you select the names of your characters?

I try to pick names that aren’t too overused, but also aren’t so unique as to be weird. I use a lot of names of real people I know, to make sure I’m giving characters real-people names. I like my characters’ names to tell us something about their character. For example, in “The Serpent King,” my main character is named after his father and grandfather, and one of his big struggles is with the weight of his name.

If you had to do something differently as a child or teenager to become a better writer as an adult, what would you do?

I would have started writing. I didn’t spend any time writing as a teenager because I thought it was a waste of time because people like me didn’t become writers.

What drew you to write about these specific, powerful subjects in your books?

I like writing about things that really matter. Topics of life and death importance. Also, I face a lot of fears through my writing. Fear of grief and losing the people I love. Fear of abandonment.

A lot of aspiring writers are afraid of writing a story that they connect to from personal experiences. Have you ever had to confront past experiences when writing your books? And if you have, what advice would you give aspiring writers to get over that fear of judgement?

Absolutely. I would tell aspiring writers that being a writer requires courage to be vulnerable, and that it’s so satisfying to exercise that sort of courage — so much more satisfying than being judged hurts.

“Goodbye Days” is a very heartbreaking and beautifully written novel. Some writers have said that if your story makes you cry, then it would be effective enough to make the readers cry. What are your thoughts about that? Have you ever cried writing a powerful scene in either of your books?

I completely agree. And yes, I have. I write my books on my phone on the bus to and from work, and there have been times that I’ve gotten so emotional while writing that I had to get off the bus and wait for the next one while I composed myself.