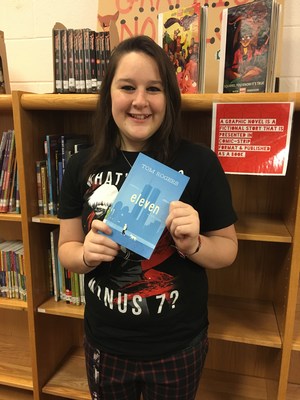 The Southeastern Young Adult Book Festival – more commonly known as SE-YA – will be held March 8-10, 2018. SEYA was created and organized by local librarians. Leading up to the event, we have arranged for eight Rutherford County Schools’ students from throughout the district to interview authors for a question-and-answer style story. These stories will publish Fridays leading up to the festival.

There are many reasons why reading has always been important to Nicole Manning.

But she had to choose just one, it would be the fact that books “transport me to a different world and allow me to escape reality.”

One such author who has done that for Manning is Tom Rogers. This year, he is among more than 40 bestselling authors who will be at the SE-YA Book Fest from March 8-10.

“The festival is exciting because I get the chance to meet authors who have written books that I love,” Manning said. “I enjoy getting to hear the authors speak about their books and the process that they go through to write their books.  Attending SE-YA and having the opportunity to meet authors has inspired me to begin writing my own short stories and poetry.”

Manning, who will be attending the festival for the third consecutive year, recently interviewed Rogers.

Nicole Manning: Who or what inspired you to write “Eleven” from a child's point of view?

Tom Rogers: I started thinking about writing a 9/11 story back in the late 2000s. It was the anniversary of 9/11, and my nephew asked me, "Uncle Tom, what's the big deal about 9/11?" He wasn’t sure but thought somebody blew up a building in New York. I realized that my nephew was only two years old when the 9/11 attacks took place, so he had no memory of that day. But people like me, who were adults on 9/11, remember that day vividly. Ask yourself what you were doing just two weeks ago on a Tuesday, and I bet you'd have a hard time recalling; but ask your parents or your teachers where they were on 9/11, and I guarantee you they will remember in almost exact detail where they were and what they were doing more than 16 years ago when they heard the news of the attacks.

There are very few days in life we remember in such detail, and this one is seared into our memories. But for today’s middle-schoolers, who weren't even born in 2001, that day is just ancient history.

It’s important for young people to know about 9/11; not only was it a traumatic and tragic event on a personal level, but it also shaped the world into which all of you were born. Our foreign policy, our military involvement in the Middle East, our approach to travel and cybersecurity, our ideas about immigration — all these things changed dramatically as a direct result of the 9/11 attacks. However, my teacher friends at the time told me schools weren't teaching students about 9/11. The teachers said this was partly because the memory was still too painful and raw, and partly because they didn't have material designed for middle-schoolers that would give them a way to teach about that day.

This got me to thinking about books that tackle difficult subjects — books like Number the Stars, Sounder, To Kill a Mockingbird, The Fault in Our Stars. These books handle troubling topics — the Holocaust, racial prejudice, terminal illness — but they do so in a way that is appropriate for young readers and also respectful of their intelligence. Stories like these help us think about how to respond to difficult times and challenge us to imagine how we would react in those situations. And those books are all written with young main characters, people around your age. Having a young person as the main character helps other young readers put themselves in those kinds of situations. So in thinking about 9/11, I realized I hadn’t read much about that day from a young person's perspective. What was it like to be a kid on 9/11? How did people respond? How would you respond?

I have worked in children's entertainment for twenty years. Even though I mostly write animation for Disney, our stories always deal with something deeper at the core: loss of a parent; loneliness; friendship; courage; loyalty; kindness. I have a pretty good idea of how to write for kids: I really just write for myself, since I still feel like a kid inside! I knew that schools needed a book to help young readers learn about 9/11, and I had a strong sense that I needed to be the one to write it. Five years later, I held the first copy of Eleven in my hands.

What kind of research did you do to prepare for writing a novel based on the events of Sept. 11, 2001?

First, I focused on contemporary news accounts of the events, in newspapers and old clips of TV coverage, since most of us experienced those events by watching them unfold on TV. The New York Times and the New Jersey newspapers ran extensive coverage of the attacks and ongoing investigations for months. These gave me lots of ideas for specific incidents in the book, such as: what it was like to be caught in the dust cloud from the collapsing buildings; how people couldn’t call their loved ones because all cell service had been knocked out; and how some evacuees walked miles to get home that day. I also learned how workers on the PATH commuter trains from New Jersey helped evacuate the stations under the World Trade Center that morning and how an abandoned “ghost train” was found in the rubble months later (which gave me the idea to make one of my main characters an engineer on a commuter train under the Twin Towers that morning).

I then zoomed in to focus on how students in schools learned about what was happening that morning. Schools around the country handled it in very different ways: some brought in TVs so the students could watch the news; others thought the events were too frightening and kept the news from their students while waiting for their parents to come pick them up. This helped me figure out that I wanted to keep Alex (my main character) in the dark at first, so that the moment he discovers what’s happening comes as an incredible shock.

I relied extensively on the U.S. Congress’ official 9/11 Commission report, which helped me keep the facts and timeline of the events accurate. It also provided a wealth of eyewitness accounts and strange details that I incorporated into the book (such as the jet fuel fireball that plummeted 93 floors down an elevator shaft and blew out the elevator doors in a lower basement lobby).

The 9/11 Museum in New York also had tremendous reference sources on their website.

And then I did a number of personal interviews with friends and family members of people who had been working at the Twin Towers at the time of the attacks. One woman I interviewed managed to escape the North Tower but lost two coworkers in the building collapse. Another woman couldn’t reach her husband, who worked at the World Trade Center, and by nightfall assumed the worst...until he walked in the door at eight o’clock that night, covered in dust and ash. He had made it out.

Do you have any personal interests in planes and dogs like Alex does in the book?

When I was a boy, I was desperate to get a dog. I finally wore my parents down, and we got Pokey, a basset hound. He had a body like a sausage with short little legs and long ears that dragged in his water bowl ... and I thought he was awesome.

I’m not particularly well-versed in planes, but the son of a close friend was an airplane fanatic as a kid. He even had a poster of the cockpit of a 747 taped onto the ceiling above his bed, so he could memorize it completely. When I was starting to imagine Alex (my main character), I realized I wanted to “borrow” some of this and give it to Alex. After all, planes are a huge part of the 9/11 story, and it was interesting to think how Alex's feelings about planes might be affected by the events of that day.

Why did you want the reader to keep wondering about who the man in the white shirt really was until the end?

Two reasons: the first is that I wanted to create suspense that would make you keep turning the pages to learn the answer to the mystery.

The second is more about the responsibility to tell a truthful story about 9/11. When I first started outlining, there was no character of Mac (the old man, who’s waiting and hoping that his son, Bobby, will make it home from the World Trade Center). There was only the story of Alex, who might or might not see his father again. That left me only two options for the ending: either Alex’s dad makes it home, or he doesn’t. But it was important to show that both of those outcomes happened thousands of times that day: there were incredible reunions with loved ones who survived, and there was also terrible loss. So I added the character of Mac, and I reshuffled the plot, and I created a mystery that would allow the story to capture the extremes of loss and love that were played out so many times that day.

Will there be a sequel to “Eleven”?

None planned at this time. I think I’ve said all I want to say about that subject. However, as a writer (and one who has written quite a few movie sequels), I’ve learned to never say “never!”

Do you have plans for writing a new middle grade or young adult novel?

I do, though it’s still too early to talk about. Before I started to write Eleven, I filled a file with notes and Post-Its and random thoughts in voice memos recorded on my iPhone. I’m still at that “playing around with stuff” stage with this new idea. In the meantime, I’m staying busy as a writer on Disney’s Elena of Avalor and developing a new animated TV show for the Disney Channel.