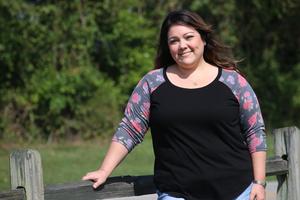 Tiffany Johnson joins School Board, plans to serve school district, families through her own childhood experiences with school

And she felt like she did not have any adults she could turn to for answers.

She was not doing well in school and now she was pregnant. Her parents were going through a divorce. A school counselor told her she needed to transfer to a continuation school and that Johnson “would be a burden on society for the rest of (her) life.”

She’s now earned two bachelor’s degrees — one in history and another in political science —while raising seven children with her husband, Travis, and having served as the director of the Sam Davis House in Smyrna. In August, Johnson was elected to the Rutherford County Board of Education where she will represent Zone 4.

“I had no adults,” said Johnson, who still vividly remembers the counselor telling her that statistically she would not amount to anything. “Literally I was on my own trying to figure out what I am going to do. It was from that conversation that I knew I was going to do something different. I was not going to let that — my choices at 16 — define me.”

She wrote a letter to the school principal.

Sent another one to the superintendent.

She even gave a letter to the counselor.

Johnson was not asking for any favors. She simply needed help navigating a path to success because, to her, it felt as though her counselor was just trying to push her off on someone else.

“I ended up graduating with my class,” said Johnson, who said she earned five extra units of credit. “I made the decision at that point — when I had Zoey — I wasn’t going to let that define my life.”

Her mother was a stay-at-home mom. Her father worked hard to provide for his family. The stress of it likely drove them apart. Johnson remembers him being exhausted.

She vowed the relationship with her husband and their family would be different from the environment she grew up in.

“I wanted to show my kids” what responsibility looked like, Johnson said, “which is why I went back to college. I wanted them to understand the decisions we make as children or in our young adult life do not have to define us for the rest of our lives.”

Tiffany and Travis put their house up for sale and moved from California to Tennessee shortly after Travis’ father passed away.

They bought a “beautiful house” from a friend of hers, who encouraged them to settle in Rutherford County, with twice the land space they would have had out west. That was July 2006.

Travis had graduated from Long Beach State University and Tiffany started at Riverside Community College. In the fall of 2006, Tiffany transferred to MTSU and graduated in December 2009.

While her kids were in school, Tiffany attended classes two days a week. She was still there to pick everybody up from school and waited until everyone had gone to bed before working on a class assignments and projects.

Looking back, Johnson said it was about balance.

Having the maturity and experience to budget time and resources brought about success in the classroom.

Their oldest child, Zoey, 20, is married to Zack Pleiman and they have two children — Ava and Benjamin.

Ireland, Emerson, Oliver and Preston, the only one of the seven who was born in Murfreesboro, are all currently attending schools in the district. The two older ones are at Riverdale High School, and the two younger kids are at Rockvale Middle School.

Johnson recently transitioned from the Sam Davis House to working fulltime for their family business.

Although she thought about running for the school board in the past, she talked it over with her husband and both agreed “it was not the right time.”

But then her youngest, Preston, spoke up.

“Momma would you run for school board,” she recalled him saying.

“He had his own childish reasons,” Johnson said, “but I thought, OK, maybe I should look at this a little bit further. We prayed about it, talked about it as a family and we did it as a family.”

She sought to succeed longtime school board member Wayne Blair, who did not seek reelection after serving on the board for the past 12 years. Johnson reached out to Blair early in the process and said he was “a wonderful man.”

Tiffany and Travis are both members of the local Rotary Club.

As a family, she said they are “always looking for a nonprofit to support” and, in the past, they have spent time volunteering with Meals on Wheels.

Last year, Johnson completed the Leadership Rutherford program. She described it as an enlightening and exceptional educational experience provided by the Rutherford County Chamber of Commerce. It was an invaluable lesson in learning the backstories and histories of local industries, nonprofits and the Rutherford County school district.

“One of the things that stood out to me the most was the ATLAS program,” Johnson said. “There (were) 1,000 students in 2016 or 2015, 1,000 homeless students in Rutherford County Schools, and that is just incredibly unacceptable to me in a society that has so much.

“Children don’t get a choice,” she continued. “They didn’t ask to be here. They are the results of adult decisions and we all have to do better.”

As a board member, Johnson would like to be an advocate for ATLAS and other programs like it.

“Every child deserves an opportunity,” said Johnson, who plans to spend her first year listening, learning, asking questions and getting to know RCS inside and out, “and, I guess, that’s rooted in where I came from, what my life experiences have been.”

In addition to being active in the community, she wants to have an open door for parents, Johnson said during an event hosted by the League of Women’s Voters. Whether it’s taking traditional phone calls or engaging constituents through social media, her plan is to stay in touch, and likewise, be available — an olive branch she would have welcomed as a teen.

When Johnson thinks about her life today compared to 20 years ago and the journey from then to now, she quoted scripture from the Bible.

“To whom much is given, much is required,” she said, “and I believe that every day.”